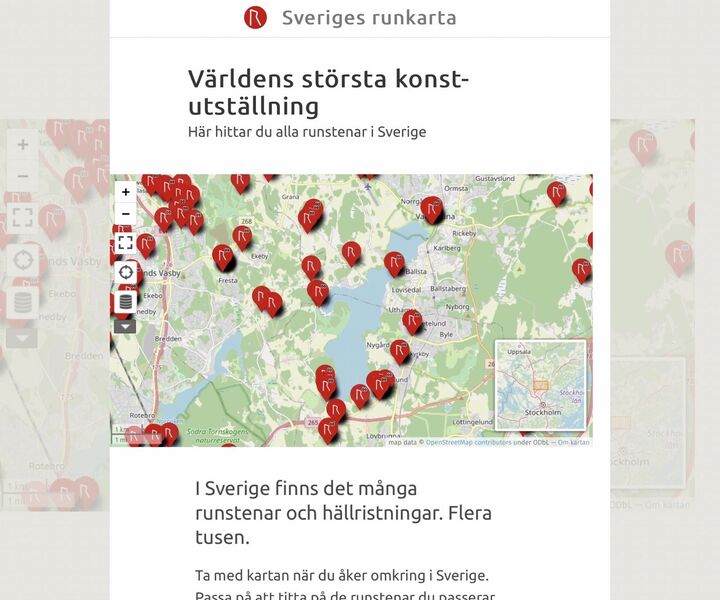 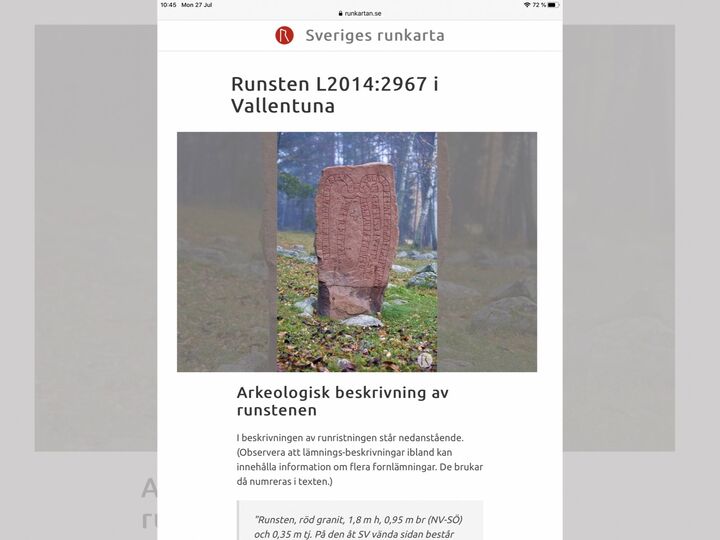 It started as an idea for a discussion post in this community, but got derailed and way out of hand...

I found it hard to find a user-friendly online map of runestones in Sweden. First I planned to make one of ten or fifteen runestones around where I live. Then I found a free database with lots of information about all runestones and rune inscribed boulders in Sweden. One thing led to another and I had to learn about GPS position conversions, programming Python, SQLite programming, and so on.

Another important part was pictures. I wanted to have at least 30 good photos of runestones on the map. That, too, got out of hand. It’s been numerous trips mainly around the countryside of Roslagen and Uppland. Currently, I have photos of more than 200 runestones and rune inscribed boulders. You can imagine how much time that has taken. 🙂 Yet, it’s just a small fraction of the thousands of rune inscriptions in Sweden.

At the moment, there is a Swedish version of “Sveriges runkarta” (Sweden’s rune map), but I plan to make a lighter one in English as well. It still is a work in progress. I find it useful though, so I thought I’d let you see it. It’s available at:

Basically, it’s an interactive map with pins marking every visible rune stone. Tap a pin to see its name, photo (if available), and a link to more information. Links to Apple Maps and Google Maps are available for those who want directions. It should work well on computers, tablets and smartphones.

Let me know if you have trouble using Runkartan. The site has more than 3000 pages. Hopefully, you will find that they load fast, except for the start page. I haven't been able to optimize that.

In addition to the map, you can find runestones based on the ”kommun” (community) they are located in. The list is here:

Oh cool! I have seen some in Täby when I went on a bike ride and got lost

Wow! This is incredible!  This is exactly the sort of thing I was looking for, but couldn't find, before I visited Sweden in Dec 2018.

Sorry, I should introduce myself, haha.  My name is Angela and I live in Brisbane, Australia.  I visited Sweden for about a month and I absolutely loved it. The land, people, culture is all so beautiful. I wish every day from down here on the other side of the world that I can get back there one day.  And now I have become a bit of Sweden fanatic, haha.  I really appreciate all the posts here on Savvity and loved your post and photos of Trysunda, so interesting and just a stunning place. May I use your pictures as wallpaper on my laptop?

Your Runkartan is fantastic, it loads fine and I am so excited to explore it now. Yes, it must  have been so much work and I imagine it is getting out of hand, but you have created an amazing resource for others to enjoy, thankyou! Must also be a nice way to spend weekends going and capturing photos of them.  I also appreciate the English translation as my Swedish is sadly limited to a few phrases and lots of individual words. Resources here are basically non-existant or very expenisve and so I am limited to apps and online learning which just isn't the same as learning from and with real people.

#3: Glad you like Runkartan. 🙂 You can use the photos of Trysunda on your laptop. I’m not sure the pixel resolution is high enough. Let me know if you need some in high resolution.

If you haven't already, you, too, should watch Stefan Thyron’s Youtube channel about Sweden. It’s both fun and informative.